Letting The Air Out: A Theology of Super Bowl XLIX
February 1, 2015 by David Atwell

Super Bowl Sunday!  Break out the queso and beer, and let’s talk theology.

Not what you had in mind for this afternoon?  Ok, I’ll be quick.  Just three loosely-connected thoughts to consider while you make the hot wings:

Whether you call it Ballghazi, Belicheat, Pigskin Malfunction or DeflateGate, you’ve probably heard of (and might even have an opinion on) the scandal that came out of the Colts vs Patriots game on January 18.  I have an opinion (the Patriots should be stripped of their AFC title, and if they win the Super Bowl, it should be marked with an asterisk for all time), but the question is, does God have an opinion?

Well, God cares about submission to authority.  In Romans 13, Paul cautions Christians to obey the leaders in power over them: “Let every person be subject to the governing authorities. For there is no authority except from God, and those that exist have been instituted by God.” (Romans 13:1-3 ESV)  This includes the NFL, and there’s no exception provided if you really wanted to win the game.

God also cares about fair play.  He plays by the rules that He instituted, no matter how devastatingly grievous the consequences.  When man sinned, the rules said that the only way for us to be reconciled was thrugh death; so He sent His only son to die and save us.  And we were not lovable people!  Messy, mucky, and covered with sin as we were, God came down.  “For one will scarcely die for a righteous person—though perhaps for a good person one would dare even to die—but God shows his love for us in that while we were still sinners, Christ died for us.” (Romans 5:7-8 ESV)  In the most inconvenient and heartbreaking way, God follows the rules that He put in place.

So, yes.  God cares about DeflateGate.  And no, I don’t think He’s pleased with the Patriots’ character.  But that’s just one Colts fan’s opinion.

In the wake of their loss to the Seahawks, Green Bay Packers quarterback Aaron Rodgers did a radio interview.  The interviewer asked him, “I always find it a little off-putting when athletes, actors and anybody says, “This is what God wanted,” or “I want to thank God for helping us win today” […] Personally, with all the chaos in the world, I’m not sure God really cares about the outcome of a game or an awards show. What do you think of statements such as these?”

Rodgers’ reply was brief and to the point: “I agree with her. I don’t think God cares a whole lot about the outcome. He cares about the people involved, but I don’t think he’s a big football fan.”

Rodgers is partially right.  The Lord of the Universe does care about the people playing the football game—that’s one of the most incredible promises God gives us in this world. “Are not two sparrows sold for a penny?” Jesus says, “And not one of them will fall to the ground apart from your Father. But even the hairs of your head are all numbered. Fear not, therefore; you are of more value than many sparrows.” (Matthew 10:29-31 ESV).  God loves us.  He cares for us.  And He counts us as far more valuable than an NFC championship game.

But Rodgers isn’t completely right.  God also cares about what we care about. “Cast your burden on the LORD, and he will sustain you; he will never permit the righteous to be moved.” (Psalm 55:22 ESV)  God is an infinite, immortal, omniscient, omnipotent, omnipresent being; of course He can care about everything His creation cares about.  All at once.  And He will use the events of the next five hours to draw people to Himself.

Losing is the will of God

In order for one team to win the Super Bowl, 31 teams had to lose.  If you assume around 60 players on the active roster for each team, that means that over 1,800 people have had their dreams of being in this year’s Super Bowl dashed and destroyed over the past several months, to say nothing of the millions of fans who dejectedly left sports bars and couches after their favorite uniforms shuffled off the field for the last time this season.

As much as winning is the will of God, it is also true (maybe even more so) that God works through loss. “But he said to me, ‘My grace is sufficient for you, for my power is made perfect in weakness.’ Therefore I will boast all the more gladly of my weaknesses, so that the power of Christ may rest upon me. For the sake of Christ, then, I am content with weaknesses, insults, hardships, persecutions, and calamities. For when I am weak, then I am strong.” (2 Corinthians 12:9-10 ESV)  God has worked in the hearts of those 1,800, and of those millions.  Some rejoice in Him through the pain of loss; still others ignore or dismiss His power.  But whichever way it works, God’s power is still made perfect.

Enjoy the game today.  Get into it.  Cheer loudly for Seattle or the ads.  (But not for New England, please)  And as winners and losers are made, remember the power of God that continues to work in this world. 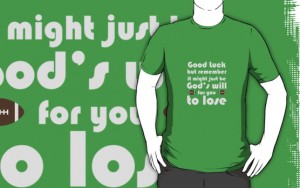 Redeeming Culture has a store!  It’s too late to get this shirt for the Super Bowl, but you can still participate in some theologically accurate smack talk with this “God’s Will For You To Lose” shirt!  Check it and others out at our Redbubble store!