When we scheduled a family trip to our nation’s capital for this week, we had no idea that we were coming while the city was closed for repairs.  The Capitol Dome: under scaffolding for restoration.  The National Mall: a dirt pit awaiting new sod.  The Reflecting Pool: drained due to geese.  The Jefferson Memorial: open, but currently being measured and photographed to aid future restoration.  As one of my friends noted, “They should have just put up a big ‘Under Construction’ sign around the entire district on your way in.”

Of course, with over 160 monuments and memorials in the D.C. Metro Area, it should come as no surprise that a couple of them would be closed.  But the bright side of Washington this week is the Cherry Blossom festival, and I have yet to see a single tree that is closed for renovation or repair.  In fact, we seem to have timed our trip to coincide exactly with their notoriously short and hard-to-predict blooming cycle.  The new life and beautiful blossoms make a wonderful backdrop to the Easter story.

The Most Spectacular Sin in History

Judas has traded the King of Kings for 30 pieces of silver.  The crowd all around him have traded in their “Hosanna“s for “Crucify Him“s.  Pontius Pilate convicts him in the name of political expediency.  The Romans mock and beat him for sport.  A fellow prisoner denounces him as a fraud, even as both of them are being executed.  And on Good Friday, the Lord of Creation lies dead by the hand of those He came to save.  John Piper calls this “the most spectacular sin that has ever been committed in the history of the world.”

When Christ is laid to rest, He is assumed to be a revolutionary.  A leader, a teacher.  A peacemaker.  Powerful, but dead.  As Bill Riedel of  Redemption Hill Church in DC has noted, “this city is full of monuments to powerful dead men.”  Their memorials and mausoleums speak of their great acts and accomplishments in life, but they are all dead.  They changed the world once…but no longer.  And Christ was assumed to be in that category.

No Monument to Jesus 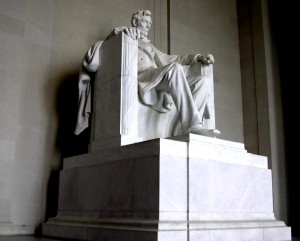 Now, to be sure, the 160 men or groups of men commemorated by monuments in Washington did grand, world-changing things, but they then died.  Their graves are full, and they can only now be remembered.  But the death of Christ was different.  He has a grave, but He did not stay in it.  There is no stone edifice to memorialize Jesus’ memory because He is no longer dead!

If Christ was not God, then His death for sin would be useless.  Yet another revolutionary, dying for a lost cause, or a good teacher cut down in the prime of life.  That is why Christ rose from the dead – to prove that He is God, with a power over death and sin!

Of course, that left Jesus’ tomb as an empty cavern.  But Christ did not leave the world without a memorial to Himself.  His purpose in dying on the Cross was to secure for His people new life – like the blooms of a myriad of flowers and perfected as millions of those blooms join together in trees and groves; a permanent festival of His blossoming creation.

And that grove, called the Church, continues still today; it is imperfect and broken as the people in it.  It is still under construction.  It is still being repaired and rebuilt, one person at a time, from the inside out.

Easter in the District 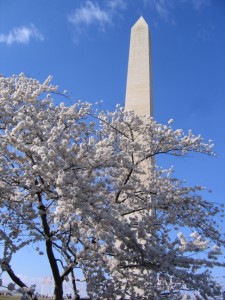 In Washington, D.C. – as everywhere else – each and every massive limestone block shouts out the glory of God, for time would fail to tell of His permanence, and steadfastness, and enduring strength; of His power and wrath; or of the fact that He is the same yesterday, today, and forever.  And time would fail to tell of His perfect timing, of His intricate workings and massive wholeness; of the tenderness and grace of His love, for so too does every cherry blossom shout the glory of God.

Let us not leave this lesson on Easter Sunday.  Let us go forth in boldness as flowers and temples to His great sacrifice and love.