The Dark Knight Rises is a must-see film. Easily the best film of the year. It’s not perfect, but it’s audacious. Nolan takes some tremendous risks, and they pay off. The scope of the story is enormous, the acting is pitch-perfect, the and you won’t be sorry you went. It’s emotional, intense and beautiful, in a stark, bleak sort of way.

If you can watch the first two films before you go, you’ll be glad you did. I’d, at least, read the Wikipedia pages on Batman Begins and The Dark Knight.

THE DARK KNIGHT RISES SHOWS US THAT ONLY HOPE CAN CONQUER EVIL, BUT ONLY WHEN HOPE’S OBJECT IS TRUE AND GOOD.

Eight years after the Joker broke Harvey Dent, Gotham enjoys a new golden age. Crime is almost non-existent, and the city prospers. But no one knows that this peace and prosperity are built on a lie. Only Commissioner Gordon and the Batman know that Harvey is not the hero everyone thinks he is. Only they know that the Joker actually won. Only Gordon and the Batman bear the weight of that lie.

The peace and prosperity aren’t a lie. Batman proved in The Dark Knight that the people can be better if only they have someone to inspire them. But at the opening of the film, that someone – Harvey Dent – is a false savior.

PEACEFUL, PROSPEROUS GOTHAM IS BUILT ON A LIE. THAT FOUNDATION CANNOT SUSTAIN THEM IN THE FACE OF EVIL. 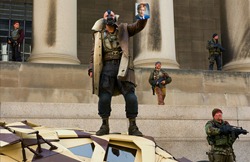 Bane knows Gotham’s peace is built on a lie.

Evil, of course, is Bane. Bane now leads the League of Shadows, and his mission is Ras al Ghul’s mission fromBatman Begins: to destroy a city that has become the symbol of corruption and evil in the world. As Batman’s foil, Bane doesn’t believe in redemption. There’s no possibility that Gotham can be better.

BANE HAS COME TO PUNISH GOTHAM. HOW? DESTRUCTION ISN’T ENOUGH. GOTHAM MUST DESPAIR.

Bane arises from a prison described repeatedly as “hell on earth”. The prison is a deep hole in the ground, so that every day, every inmate can look up and see the possibility of escape. All one must do is climb the sides and make an impossible jump.

Salvation lies just out of reach…

Bane claims it’s this promise of escape that makes the prison so terrible. The inmates encounter the hope of freedom every day. But because the jump is impossible, the hope becomes a torture that deepens despair.

Before Bane destroys Gotham, the city must feel this same despair. They must hope that they can save themselves.

Bane isolates the city, uses the bomb to keep the larger world out and puts Gotham in the hands of “the people”. Bane creates an anarchy. He gives the people an illusion of control. It’s an illusion because no matter what happens in the city, the bomb will destroy it. No matter what the people do, they can’t escape death.

Even Bane’s punishment is this despair-laced-with-hope. Each victim can choose Death or Exile. Of course, they all choose Exile: they’re taken to the edge of the bay and sent out across the frozen water. The ice is too thin to hold them for long, but every exile has that small hope. Death is a sure thing. But maybe, just maybe, the ice will hold for them.

BANE IS A SYMBOL OF DESPAIR. HE DESIRES TO TURN THE WHOLE EARTH INTO THE HELL OF HIS PRISON.

Against this monstrous, relentless evil, in the face of this creeping despair, Batman must become more than a Dark Knight. Whereas until now, Batman has been a symbol of Fear, he must now become Hope.

But even Hope isn’t enough. If the person we place our hope in can’t really save us, then our hope is empty, worthless. For Batman to save Gotham, he must defeat his own hopelessness.

BATMAN MUST CONQUER DESPAIR. HE MUST DIE AND BE REBORN. HE MUST GO TO HELL AND BACK TO SAVE HIS WORLD.

So Batman is broken and cast into hell (on earth). Bane leaves him to watch as Bane reduces Gotham to ash, all the while knowing that if he could just get out of the pit, he could maybe save his city.

Batman’s road to redemption deserves its own post, but it will suffice here to point out that against all odds, Batman conquers his own despair, escapes from the prison and returns to Gotham.

He faces Bane, who can only utter,

For Bane, Batman’s return should’ve been impossible. Because in Bane’s world, no one escapes despair. No one conquers death. No one can be redeemed.

BATMAN’S RETURN IS PROOF THAT HOPE IS NOT LOST FOR GOTHAM. THAT SALVATION MAY, IN FACT, LIE JUST AROUND THE CORNER.

BOTTOM LINE: THE STORY OF HOPE IN THE FACE OF DESPAIR AND DEATH-DEFEATING DEATH AND RESURRECTION MAY SOUND FAMILIAR. NOLAN NAILS IT IN THIS EPIC CONCLUSION TO A MARVELOUS TRILOGY.

Previous articleTough Passages, Appendix B: The Commands of the Bible