Not his birthday; everybody knows that The Boy Who Lived turns 37 at the end of this July. Everybody.

Dumb or not, the American people were certainly different. By the time I picked up the series three years later, the embers of the first book had ignited a forest fire in the American church like I had never seen before.

Harry Potter and the Sorcerer’s Boycott 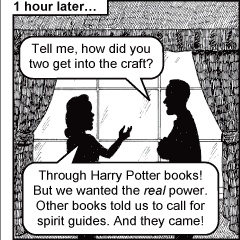 Hot off a headline-grabbing but ultimately toothless boycott of Disney’s The Hunchback of Notre Dame (for…somewhat unclear reasons) the year before Potter’s scarred forehead popped onto the screen, the American church had quite a platform from which to address popular culture. Of course, they were no strangers to decrying popular culture; music, comic books, violent films, sex in films, and more had all captivated the attention of the church from time to time. But Harry Potter gave them a new, thrilling target: witchcraft.

Of course, actual witchcraft is truly demonic. It’s a power that Satan uses to turn people from God. But the spells Harry uses aren’t real witchcraft. Heck, they’re not even real Latin!

Still, the boycott was begun, the die cast; and suddenly we saw books, tracts, thinkpieces, radio addresses, articles on the young internet, and even sermons about how the Harry Potter series was a gateway into true witchcraft and demonic possession.

Harry Potter and the Chamber of the Monomyth 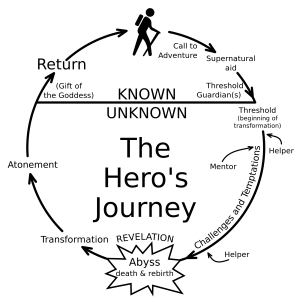 Even as a fifteen-year-old, that didn’t ring true to me. The series didn’t feel like a handbook for witchcraft any more than The Hardy Boys was a handbook on how to be within 10 miles of a 150-page mystery every couple of weeks. It was clear that the books were a brew of fantasy lore crafted from equal parts mythology and original content; they had a familiar, perhaps even epic story to them, and the magic was simply the backdrop upon which that story played out. Dorothy had the wonderful world of Oz, Odysseus had his boat, and Harry Potter had a land of wands and magic.

Inevitable comparisons were made by Potter apologists to the work of Tolkien and Lewis, who also set their stories in worlds of magic and mysticism; Probably a fair comparison, I think. In all those cases, the magic serves the story, not the other way around. The magic is the thread on which a bead string story is strung.

More than just being harmless, the Harry Potter story actually has a lot of depth and resonance with The Story. Rightly seen, it won’t push us from God; but, perhaps surprisingly, draw us closer to Him.

Harry Potter and the Gospel Story of Fire

People who don’t read Harry Potter’s story won’t see the message of the power of friendship; a story which, much like David and Jonathan in the Bible, shows a loyal, sacrificial friendship between people who loved one another greatly.

People who avoid Harry Potter won’t see the message detailing the importance of standing up for what you believe in, even if you must stand against authority to do so. 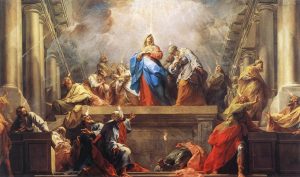 People who turn away from Harry Potter won’t see the triumph of equality over pedigree. They won’t see the powerful symbol of the protection of love. They won’t understand the weight placed on seeking out the truth, whether it’s easy to find or not. And they won’t catch the beautiful parallels of a world beyond our own in which incredible things may happen.

But most of all, people who reject Harry Potter miss out on the powerful sacrifice in every book; where someone lays down their lives for friends, family, and an undeserving school.

All of this we love, because it reminds us of Christ. Because it echoes in our hearts, and we love to see stories like that.

Harry Potter and the Prisoner of Rejection

For a few years, it became vogue to boycott the series for its “evil” attempt to turn normal kids to witchcraft. But those who did stay out took themselves out of some very interesting conversations.

I’ve talked before about the trichotomy of Receiving culture (accepting it all into your mind and worldview indiscriminately), Rejecting culture (abandoning and ignoring popular culture without listening to anything). And, of course, Redeeming culture; looking critically to find the weight of God’s glory in everything we create and enjoy.

Now, some culture should rightly be rejected. Some of it is demonic, evil, anti-Christ. But more often, it should be avoided personally because of convictions or sin tendencies in our own hearts. We should be careful to investigate closely before we call others to boycott.

Boycotts are an intentional attempt to reject culture on a large scale, forcing our convictions on others; to turn inward as a community and try to ignore what the culture can tell us about who God is.

Harry Potter and the Narrative Hallows

God has written His story like a lightning-shaped scar on our hearts. And when He’s around, we can feel it.

So, in retrospect, a big part of what would eventually become Redeeming Culture began when I first picked up a Harry Potter book. I learned to not just reject things proudly; but also to not just let everything wash over you and fill you up without knowing what it is. I learned that Redeeming Culture meant to seek gold, to dive deep into a story and find God there also, smiling with joy that we found His story in our own hearts. And I learned that boycotts can make you miss out on some important Gospel truth.

God has written His story like a lightning-shaped scar on our hearts. And when He’s around, we can feel it.

Happy Birthday, Harry Potter!
Thanks for reading Redeeming Culture. If you’d like to write for us about your favorite wand (or something even more important), drop us a line in the comments below or click here.

Next article Review| My Life as a Zucchini: Community, Adoption, and Finding Family