Tough Passages, Appendix B: The Commands of the Bible
March 25, 2016 by David Atwell

Many times when people (Christians and unbelievers alike) misunderstand or misapply the word of God in the Bible, it’s because they view the commands of God incorrectly.  Either they assume that an Old Testament law doesn’t apply anymore, or they bring up some obscure verse from Leviticus about people with questionable parentage being unfit for leadership.

That’s understandable when you consider there are four types of laws handed down to Israel.  To understand them better, you can look at them as a grid: 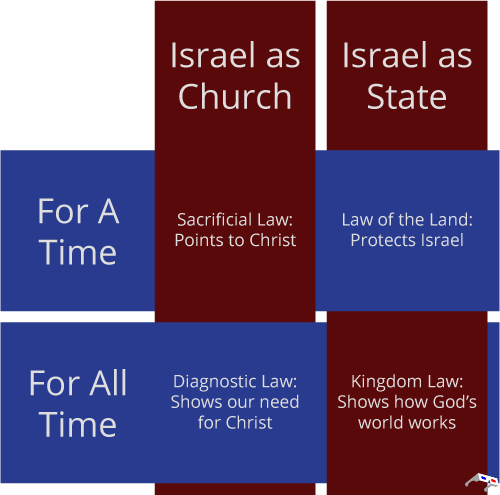 Let’s talk about the columns and rows first, and then we’ll investigate each quadrant in particular.

Contexts and Durations of Command

Israel was called by God as both a church and a state, and so the laws must be viewed in the context they were given.*

Similarly, the Bible was written to specific peoples in a specific time, but it was intended to apply to all peoples in all times and places.  So the laws must be viewed in light of the duration they were intended.

The Four Types of Laws

Please don’t hit anyone over the head with the “For A Time” laws; that’s silly and unhelpful.  The purpose of theology is to reveal your heart, draw you to God, and make you more like Christ.  I hope this little model of Biblical laws helps you do that.

* There are some laws that fall on both sides of this divide, and there are many whose status is debated.  Since God formed Israel as both church and nation, trying to separate them out is something like trying to identify the constituent pieces of a cake after it has been baked.

** Many theologians categorize both bottom quadrants of “For All Time” laws together as “moral laws.”  Far be it from me to disagree with more intelligent men and women than myself, but I find it helpful to look at them separately so that it is easier to see the purposes behind them.