I don’t mean that in the “game systems have a lot of processing horsepower” sense.  Games can make us feel something in a way that no other medium can.  I could give you dozens of examples from the past, but it seems like recently, the only games that have been seriously making an attempt at this have been indie games.

One such indie game is called “That Dragon, Cancer” and it launched yesterday for Steam and Ouya.

Last Thursday, one of my favorite podcasts, Reply All, released an episode about it called “The Cathedral.”  It’s brilliant, beautiful, terrible radio and you should listen to it. It’s embedded below.

I know the stats. You’re not likely to listen to this, but let me tell you honestly: please do. Take the time. It’s hard and painful and beautiful and lovely, all at the same time.

I haven’t played “That Dragon, Cancer.”  It’s only been out for a day, for one thing.  But also, it hits a bit close to home.

As you probably know, I have a son who is nearing 15 months of age.  What you may not know is that, when he was a month old, he was in the hospital, too.  His condition wasn’t nearly as serious as Joel Green’s was; Calvin just had a blood platelet issue, and he was only an inpatient at the hospital for a very short time.  He’s since been discharged and is a 100% normal 15-month-old little man.

Still, I can certainly identify with Green’s choice to portray the moment of finding out about the extent of his son’s illness as a room slowly filling with water as doctors shout “comforting” words at him at top volume.  There’s a sense of losing control, and it’s not any good version of that feeling.

And that’s the point.  Ryan Green tells the interviewer in this podcast, “I want to show you what it feels like to feel helpless but to have received grace. I felt like it would be ultimately encouraging to people.”

It’s not often that we review Christian cultural items on Redeeming Culture, but the game’s developer – Ryan Green – and several members of his team at Numinous Games, are openly and unabashedly Christians.  As you heard in the podcast above, they openly pray for their son and use audio clips from those prayers in the game itself. 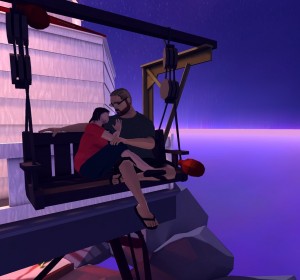 But all of it feels genuine- probably because it is.  Ryan and his wife Amy actually lived this life, and the beautiful game they created, with its low-poly images and beautifully engineered soundtrack, feels like a poem about their experiences in the hospital with their son.

Some Christian developers might be tempted to make it all some feel-good, happy-go-lucky game, where you can build up prayer points and go on the offensive against cancer, or use your spiritual abilities to heal the child instantly and cause some Atheist doctor to come to Christ, complete with a sinner’s-prayer quick-time event.

But there’s something Ryan says in this podcast, when they’re having their prayer and worship meeting near the end of the episode:

All we have is death here on this earth. That’s all we have. The only hope we have is your resurrection, God. So why would hope hurt us? All I have is my disappointment. That’s what I start with.

Sometimes it isn’t the response, but the cry that God wants for us.  Maybe He wants us to question and fear and hate what’s happening around us because it makes it so much more obvious how different He is from everything else the world has to offer. 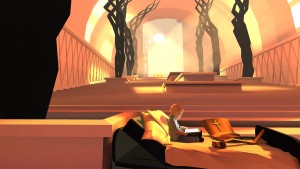 The reviews all agree that it’s a profound game, never sappy, overwhelming in places and emotional everywhere.  Reviewers who are also parents guarantee crying.  Somehow the sparse graphics and evocative images of little baby Joel in his red wagon or hospital bed make me well up, all by themselves.  Simply knowing about this game is a painfully heartbreaking experience.

Maybe I need to feel that pain and struggle with the doubt that comes from it.

Maybe it’s good to understand the darkness so that the light God offers is so much brighter by comparison.

Maybe this would help me love my God, my wife, and my son better.

Maybe I will play this game.

“That Dragon, Cancer” was released yesterday and is available on Steam or at thatdragoncancer.com.