The Author of Suffering
August 26, 2015 by Ryan Earnhart

This article does contain spoilers for 2006’s “Stranger Than Fiction.”  You have been warned!

How odd would it be to find out that God had chosen you to be allowed to suffer?

That’s hard enough to believe by itself.  Some religions (and even some Christian denominations) even fight the idea that God has any hand in your suffering.  But the suffering we all face is part of the story He’s writing to save the world—and that sounds even crazier than something you could make up.

This month our podcast is centered around the movie Stranger than Fiction, a story about a man who finds out that someone is writing his life (and more importantly his “imminent” death).  A man named Job in the Old Testament can relate.

The Story We Write

When the movie begins we see how structured and organized Harold Crick’s life is and how he works to maintain that order, even down to the number of brush strokes he uses to clean his teeth.  His life does not vary and he sees it as successful.  He doesn’t even feel the need for love or companionship; he is completely content in his current situation with no dreams or aspirations of anything beyond this blissful rhythm he’s found.

Though much more well-off, Job is in a comparable situation.  He has his livestock of various kinds organized and tended, his children have their own homes and regular parties, he makes sure to pray for them after those parties–you know how kids can get–and Job doesn’t see any way things could be better.

Then the narrator of both stories steps in and changes their whole world.  Harold is distracted at work, is confused about a love interest he didn’t want or expect, and suddenly desires more in his life than to just continue his routine ad nauseam.

Job’s change is much more tragic and messy.  Satan tells God that Job is only faithful to his creator because of the blessings that he has been given.  So God does an odd, or even strange, thing: He lets Satan take it all away.  In the span of a few minutes Job is told that his livestock have been carried off by bandits and all his workers have been killed (except the messenger), and that an act of nature has killed all his children.  Everything he valued and cared for was taken from him at the same time. 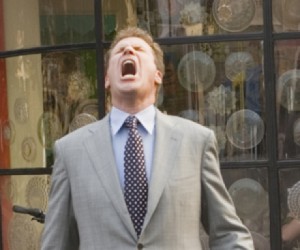 Interestingly, neither Job nor Harold had angered their narrators in any way; neither had they been warned of what was to come nor why it was happening.  Harold became angry and tried to escape, but Job took a different approach.

He naturally grieved the loss of his children and possessions, but he did not get angry or try to run from God.  Instead he said one of the most theologically sound things that you could possibly come up with at such a time, “The LORD gave, and the LORD has taken away; blessed be the name of the LORD.” (Job 1:21b, ESV)  He realized that, yes, his narrator and creator could be responsible for everything he had lost, but it was the creator that provided it and gave it to him in the first place.

An easy example would be asking a neighbor to lend you a rake in the fall to help you clear your front lawn.  It wouldn’t be right for you to get angry with your neighbor for taking the rake back, whether it was to rake their own yard, lend it to another neighbor, put it in their living room as part of a do-it-yourself Christmas tree or any number of things they might want to do with it.  It was their rake from the beginning; they have a right to it.

Worldly society, especially in the United States, would have you believe that your property is yours and you should try and amass as much of it as possible so you can be happy (or at least happier than the next guy or gal).  But this does not ring true in either tale; Harold may have been flustered by his apartment being demolished but he becomes a much happier person after he is forced out of his routine, not as a result of amassing more stuff to replace it.  As well, Job is happiest in his story when he is not being convinced that God owes him anything, even an explanation for why these horrible events happened to him.

Both our characters are given advice, and both get the bad kind.  Harold is told to just medicate himself unnecessarily and Job is told (by his own wife!) to curse God and die.  Luckily for our heroes, neither one follows through on these ill-conceived plans and instead seek out alternate explanations for the story that they’re in.

Harold seeks out a literary professor, and Job’s friends show up to give him their 2 cents.  Harold’s new mentor has some good ideas and advice, but at the end tells Harold that he should die for a more poetic and lasting legacy.  Job’s friends, on the other hand, share a theme amongst themselves: it must be Job’s fault these things happened, and so he should stop sinning and make himself right with God.

While Harold decides to follow through on his mentor’s advice, his narrator has a change of heart for him at the last moments and spares his life.  Unfortunately, Job is pushed over the edge by his compatriots and finally questions the God he had relinquished all his possessions and responsibilities to earlier.  God responds with some tough love for the one He esteemed so highly in the presence of Satan.  Job immediately repents of the one actual sin the Bible says he committed, and God blesses him with twice as much as he had before.

So when life throws things our way and we think that there is no way the invisible forces that are watching over us and taking care of us could possibly know what they’re doing, we need to stop and think about Harold and Job.  Harold needed his life to be shaken to realize what he had been missing.  Job needed his life to be shaken to minister to Satan on God’s behalf.  It’s a tall order, but try and prepare to have your life shaken.  Don’t lash out or demand to know exactly what is going on and why.  Prepare to allow God to do the work He needs to: for your own benefit, for a ministry to someone you may not even know, or anything you can think of.  Even if it’s stranger than fiction.